Showing posts from May, 2009
Show all


The concept of Voice SMS has not taken off in India. There is a lack of awareness regarding Voice SMS and how to go about using it. Further when call rates are so cheap and the Indian user is comfortable sending text messages, where is the context for sending Voice SMS?

There can be three broad contexts for sending a Voice SMS over a text SMS:

1. The first is for those who are not comfortable in typing out text messages. People like the elderly would come into focus here. Also people who are constrained by the English language key pad and would be far more comfortable in sending messages in their local languages. This has not been exploited by marketers till now.

2. The second context which Airtel tries to exploit is about adding “emotion to messages”. The campaign which Airtel come out with showed Saif recording a Voice SMS for Kareena who is upset with him. The “emotions” conveyed by Saif when he says "I miss you so much, it hurts", would not h…
Post a Comment
Read more

Impatience is the new life on punchlineexpert 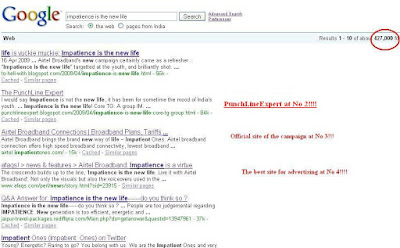 According to google, PunchLineExpert's write-up on the "Impatience is the new life" campaign is ranked higher in page results than both Airtel's official site for the campaign and also the review on afaqs.com. Click the screen shot below for a better view.